Everyone has a dad or father story that has become a cornerstone of their existence. That story may be a painful one or a powerful one but the impact of it stretches into multiple areas of our everyday lives. Join me as I interview 13 influential men about the impact that a father story has had on their education, business, families, and self-care.

Have you ever felt that there was one significant event that completely shifted how you saw life? D Murph shared the impact that his oldest son had on his drive to create a legacy. Creating a legacy is something we hear about often but he became focused on creating a legacy that would carve the D Murph name into history. He wanted to be an example of reaching a common goal while being yourself.

Wanting to give your children something they can carry comes with some humility and transparency. You have to bring them in on the vision by showing them momentum. When D Murph won Podcaster of the Year at the Inaugural SpeakerCon hosted by Cheryl Wood, it proves that his hard work was paying off.

During the 2009 to 2010 time span, D Murph dealt with his most challenging time. The icebreaker for him was that his life sucked. He had dealt with a series of low points that seemed to be sending him into a downward spiral. Instead of excepting defeat, D Murph rose to the challenge by reaching out to his father and having a candid conversation on his podcast. It shifted things for him and made an impact on his listeners.

Be okay with telling on yourself so others don’t get the chance to and understand that it may not always look how you planned it. Confidence and vision go hand in hand. The time to be silent is gone because you may be what someone else needs.

Have you ever been caught in the act? Whatever you were doing completely froze when the door opened including your heart. At 16 Michael knew that the next words he would hear were going to hurt. So when his father didn’t say anything and simply walked out the door he was bewildered. What the heck just happened?

For the next three days, he waited for the disappointment and the chastisement. It still didn’t happen. His mother made the suggestion that he go have a conversation with his father. Michael objected for fear of his life but when he finally did it was a conversation that changed everything for him. There was a power in his father’s silence that was worse than any punishment.

Seeing him a young man meant giving Michael a hard truth. If you do it then all that comes with it is your responsibility. His father made it known that he would not be taking care of any children or him if the girl became pregnant. He was looking beyond the moment to teach Micahel a lesson in the levels of love. Father’s love in such a way that they see who you can be 10 years from now and try to help you have the greatest experience to get there. They fight against you having similar flaws and weaknesses as them.

Definitely not an easy task but a necessary one. That level of love is not one that is often discussed by anyone but Michael digs in on how this one lesson impacts his relationship with his son. Even when it comes to sports and video games. The love a man shows his children is a cornerstone of their relationships, mental health, spiritual growth, and physical wellbeing.

Michael Gibson is a loving husband and father of two beautiful children. He is known as Biblical Poet. Michael is an author, musician, writer, speaker, storyteller, video producer, and spoken word artist. His love of his Heavenly Father can be felt in everything he does. Michael takes on socially relevant topics from a faith-based perspective. His aim is to challenge the reader to see the world from a different vantage point. He believes that words have the ability to create, inspire, uplift, and empower. When you experience his work, he will undoubtedly leave an indelible impression that there is hope, faith, and love in this world. Some of his most notable pieces include #nonotever, The Flag – A comprehensive review, Our Hearts Cry, and His Presence. Michael also shares his heart every Thursday at Noon ET on Facebook in a series called “Why I Go To Church” otherwise known as #YIG2C. If you need a quick boost of inspiration you can catch Michael’s #MomentsWithThePoet. Michael believes problems are solved by raising awareness and communication. He knows that some things we can’t run from but we must face them head-on. He will always confront the status quo but always in the spirit of love. If you want to follow Michael he can be found on Facebook and YouTube just type #BiblicalPoet.

Building effective relationships is a foundational principle that Brother Bedford learned after his persistence led to a conversation with Dr. George Fraser. That initial conversation led to many more including a series of conversations with Black Millionaires. That was an opportunity for him to show the world that success runs in our race which was not a common statement made or heard.

It was a chance to change the conversation.

Here he was, a brother from the east side of Detroit, looking to do an interview with Dr. George Fraser. His assistant told Brother Bedford that she didn’t think Dr. Fraser would do the interview. Undeterred, he left his contact information. It caught him off guard when he received a call from Dr. Fraser later that day who was ready to do the interview on the spot. (If that isn’t motivation to shoot your shot I don’t know what is!)

You may have an idea right now and there is someone that you want to connect with in order to bring the idea to life. Brother Bedford’s word of advice is to make the call!

Brother Bedford’s tips for building effective relationships:
~ Develop Humility
~ Develop the relationship
~ Be sure to thank people for their time
Everything that you need, there is someone who has it. They may only be one phone call away. One thing that you will need to do in order to take this step forward is to eliminate the noise. Often times there is negative chatter in our head that keeps us from making that next move. As men, there will be moments when you need to find someone that will push you out of your comfort zone. Be mindful to look for the hand of God in the connections that you make.

Don’t ask, “What would make them choose me?” Instead, tap into the value that you bring and lead with that.

Brother Bedford, The Founder of The Masters Of Business Network & Mastermind, serves as one of the most trusted and revered marketing and business advisors to entrepreneurs and business owners.

He’s The Host of Conversations With Black Millionaires and The Co-Host of The Power Podcast with Business Icon George Fraser. These two podcasts have been seen and heard by at least 1 Million People Worldwide.

Brother Bedford’s life’s work has been and continues to be dedicated to helping Black People grow businesses, advance careers, and multiply their bottom lines exponentially. He strongly believes in sound business practices and is a champion for those who want to build their own business, advance their career, increase their personal wealth, and add to their personal growth. 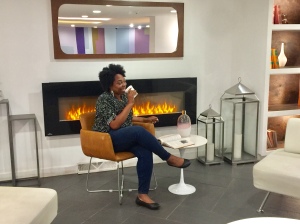 With over ten years of writing, Altovise uses her platforms to create opportunities for women to have their voices heard. Founder of the World Voice League, she educates and empowers through courses, a weekly accountability call, blogging, books, and the #SpeakEasy Podcast.